City scatter Chelsea, Lorient, Reims and the TFC score 19 goals, come back for Emery… Discover the highlights of Sunday’s matches in the Coupe de France and in Europe.

Mahrez opened the ball against Chelsea.

1. Manchester City crush Chelsea. Three days after winning Stamford Bridge (0-1) in the Premier League, Manchester City made only one mouth of Chelsea (4-0). Without really forcing, the reigning double English champion made the difference thanks to a wonderful free kick and a penalty from Mahrez (23rd, 84th)a penalty from Alvarez (30th) and a goal from Foden (38th) after a great collective action. A new demonstration for the Citizens, a nice slap in the face for the Blues. 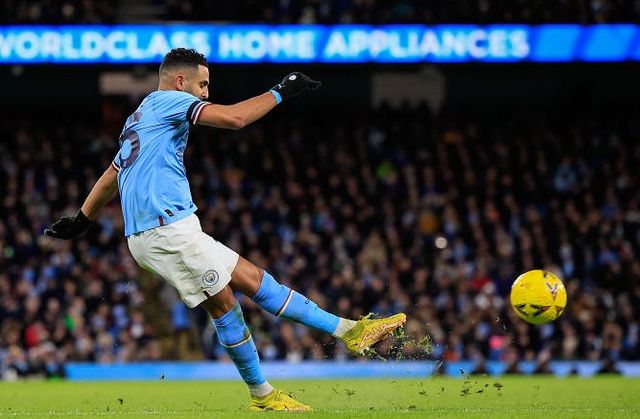 2. Lorient, game, set and match. Back to a good level in Ligue 1, Lorient had no mercy for La Chtaigneraie (R1) (0-6). The Hakes initially had trouble finding the fault before rolling following the achievements of Kon (43rd sp), Caithline (45th, 61st), Aouchiche (51st), Diarra (54th) and Grbic (78th). A logical and very easy success for the Breton formation, which still dreams of a second Coupe de France after that gleaned in 2002.

3. Reims are not letting their guard down. On an impressive series of 9 matches without defeat in Ligue 1, Reims inflicted a correction Loon Plage (R1) (0-7). Like Lorient, the Champagne club took all their time to get into the game before proposing an amazing festival with achievements from Zeneli (45th + 3 sp), Sierhuis (54th, 90th), Flips (69th), Adeline (77th, 78th) and Guitane (89th). The Will Still band remains as solid as ever!

4. Ajaccio ad s’employer. Unlike Lorient and Reims, Ajaccio had a lot more trouble getting to the end of Jura Sud (N2) (1-2). The Corsican club is however off to a good start with goals from Diallo (45th + 2 sp) and Levine (63rd). Wague (90th + 1) gave hope to his people but a little too late to hope to return to the game. A success that will do good for the morale of Olivier Pantaloni’s players, the fight to stay in Ligue 1.

5. Toulouse strolls. A few hours after the boxes of Reims and Lorient, Toulouse was at least as impressive, clearly taking the upper hand over Lannion (N3) (1-7). Skytt (12th), Begraoui (32nd), Dallinga (39th, 75th), Birmancevic (57th) Boisvilliers against his camp (66th) and Spierings (81st) scored for the Pitchounes against a goal by Haug against his camp (36th). A victory that suffered no challenge for the men of Philippe Montanier.

6. Auxerre on the wire.If all the elite clubs have completed the work within the regulation time, this is not the case for Auxerre, who went through a mouse hole Dunkirk (N) (2-2, 4-5 pens). First led following a goal from Baghdadi (5th) then in front thanks to a double from Raveloson (19th, 35th), the Burgundian club was taken over in the second period on a goal from Ipiele (68th). AJA managed to get away with the penalty shootout by converting all their attempts.

7. Naples does not shake. Before the clash against Juventus on Friday, Naples ensured by winning on the ground of Sampdoria (0-2). After a missed penalty from Politano (6th), Osimhen opened the scoring for the Partenopei (19th), in numerical superiority following the direct expulsion of Rincon (39th). Elmas made the break on penalty at the end of the game (82nd). A success that allows Napoli to temporarily take a 7-point lead over the Old Lady.

8. The Aston Villa crack. The reassembly of March 8, 2017 sticks to his skin, Unai Emery will be thinking for a long time this January 8, 2023. Clearly above for 85 minutes, Aston Villa lost to Stevenage (D4) (1-2). While Sanson (33rd) released the premises, the expulsion of Dendoncker (85th) changed everything since Reid (88th sp) and Campbell (90th) punished the Villans in their lair. A bad evening for the Spanish manager…

What did you think of these results in the Coupe de France and in Europe? Feel free to comment in the comments section below.

the crazy tracks of Inter for its XXL transfer window

admin - January 11, 2023 0
© netdoclub.com 2023
Manage Cookie Consent
To provide the best experiences, we use technologies like cookies to store and/or access device information. Consenting to these technologies will allow us to process data such as browsing behavior or unique IDs on this site. Not consenting or withdrawing consent, may adversely affect certain features and functions.
Manage options Manage services Manage vendors Read more about these purposes
View preferences
{title} {title} {title}
MORE STORIES